WHO PROTECTS THE HADITH? PART ONE OF THREE 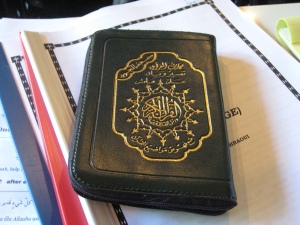 Both the Qur’an and the Authentic Hadith of the Prophet (pbuh) are Safeguarded by Allah.

Evidence From the Qur’an to Refute those who Think the Qur’an alone is Safeguarded.

Question: Sis. Mehjabeen writes from Edmonton, Canada writes: I read your article in which you say that Jewish scholars attacked Hadith and rejecters of Hadith are influenced by them. I have the book MAQAME HADITH by Allama G.A. Pervez in which on page3 he quotes God’s words from the Qur’an: “Surely We revealed this Qur’an and surely We are its Guardian.” (15:9) Then on page 4 he compares the Qur’an with the Hadith and writes: “Allah Almighty has not taken the responsibility for safeguarding anything other than the Qur’an.” How can you disagree with that.? Allama Pervez is right and you are wrong. Qur’an is full of certainty, Hadith is a human product.

Dear sister. Asalamu alaikum. Surah 15, verse 9 itself indicates that the entire edifice of the rejecters of Hadith is built on a false premise.

WHAT IS SAFEGUARDED: QURAN OR ZIKR OR BOTH?

The verse does NOT use the word “Qur’an”; it uses the word “Zikr.” In Arabic it says: “Inna nahnu nazzal-naz-zikra wa inna lahu la-hafizun.” Thus the correct translation is:

“Surely We revealed the Zikr and surely We are its Guardian.”

Yusuf Ali has translated az-Zikr as “the Message.” The word is used numerous times in the Qur’an and these usages indicate that Zikr is not only the Qur’an but the entire Islamic way of life implemented by the Prophet (pbuh).

As we shall see, when Allah says that Allah is the Guardian of the Zikr, it’s a reference to the WORDS of the Qur’an, the MEANING of the Qur’an [explained by the Prophet, pbuh], the way of life of the Prophet , pbuh, [documented in Hadith], the entire system of Islam transmitted by the sahaba, the spirituality, the Law. ALL these are safeguarded by Allah.

Let us look at the Qur’an’s use of the word “Zikr.”

Surah al-‘‘Araf 7:63 :uses the word not for the Qur’an but for Allah’s message sent to Noah as a reminder to the people. It says:

“Do ye wonder that there has come to you a reminder from your Lord [zikrum-mir-rabikum] through a man of your own people, to warn you,-so that ye may fear Allah and perhaps ye may receive His Mercy.”

Thus the “reminder” and “warning” aspect of Allah’s message to others than Muhammad’s (pbuh) people is also called Zikr.

Where Allah uses “zikr” as referring to the Qur’an, Allah makes it clear that it is to be explained to mankind by the Prophet (pbuh), which is precisely the role of Hadith: Allah Subhanawataala states int eh Quran:

“(We sent them) with clear signs and scriptures, and We sent down unto thee (O Muhammad) the Zikr, that thou MAY EXPLAIN CLEARLY to MANKIND [li-tubayinna lin-naas] what is sent for them, and that they may give thought.” [16:44]

DIFFERENTIATING BETWEEN THE BOOK AND THE MEANING

At places Allah Subhanawataala differentiates clearly between the BOOK and the MEANING in that book (which as seen above was explained by the Prophet, (pbuh):

“We have revealed for you a Book in which is your ZIKR. Will you not then understand.” [21:10]

It is this “zikr” within the Book which is explained by the Prophet, pbuh, and is enunciated in Hadith!