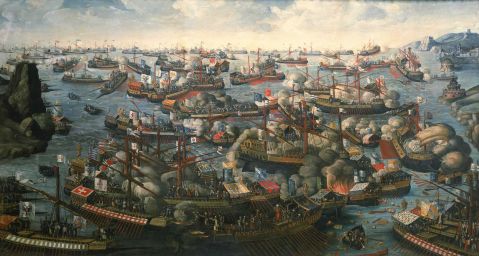 Though this is a later photo of a naval battle between the ottomans and the Christians, it depicts naval warfare and imagine being a woman in the midst of this.:Courtesy: http://en.wikipedia.org/wiki/File:Battle_of_Lepanto_1571.jpg

One of the greatest female companions of the Prophet, pbuh, was Umm Hurum bint Milhan.

She was his foster aunt and was always in  the forefront of the Islamic struggle. Often he would go and rest in her home after a long day of preaching and teaching.

Once when he was asleep in her home, he awoke laughing happily and said that he had seen  the Muslims advancing forth on the ocean. She appealed to him to pray to Allah that she be one of them. He went back to sleep and again awoke and laughed happily and talked about the Muslims going forth on the oceans. Umm Hurum again asked him to pray that she be one of them. He prophesied to her:

“You will be among the first of them, not the last of them.” Then he blessed the mujahideen who would go forth on the oceans:

“The first force which will go forth to fight on the oceans is promised paradise. Again Umm Hurum asked: O messenger of Allah, will I be one of them. He said: Yes, you will be among them.” [Sahih Bukhari kitab al-Jihad].

The prophesy was  fulfilled years later during the caliphate of Usman, r.a., the third rightly guided Caliph of Islam.  When the united naval fleets of Europe approached Muslim lands, Usman, r.a., sent forth an Islamic naval fleet to stop the European forces. In the battle which followed, the ENTIRE European armada was destroyed in one day.

The illustrious commander of the fleet appointed by Usman, r.a., was Muawiyya, r.a.  Umm Hurum, r.a., and Muawiyya’s wife Fakhta were part of the naval warriors.

Later the Muslims pursued the Europeans to the island of Cyprus where in an accident Umm Hurum died. Her grave in Cyprus is visited by both Christians and Muslims. The Christians call it “the grave of the Good Woman” and some even seek blessings by visiting there.
[We do not know if the grave has survived into our times.]